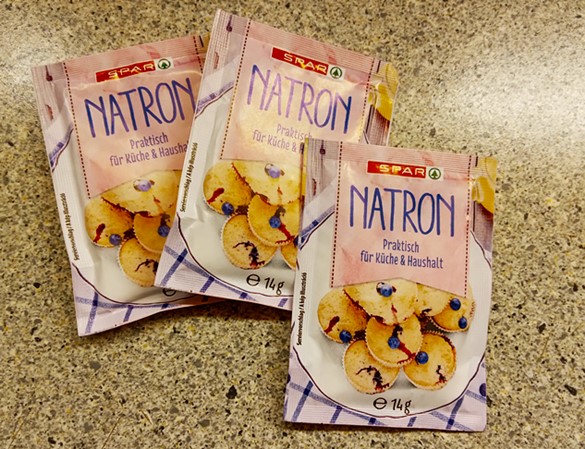 The German word for baking soda is…

Living in or visiting Vienna, Austria and not speaking fluent German will occasionally mean you struggle to find the things you can easily find at a grocery store at home.

After all, unlike when I lived in Thailand where most packaged food products have a Thai label on one side and an English label on the other, here in Vienna every food label is only written in German.

That can mean heading to the supermarket while forgetting your phone, and not being able to check online for the German word for something like baking soda.

Something that happened to me a couple of weeks ago.

So, over the next few weeks, in an effort to give you all the information you could ever need when in Vienna, I’ll put together a series of short articles telling you what the German word or phrase is for popular items, and where to easily buy them.

What is the German word for baking soda?

Being my usual unorganized self, I actually went to Spar twice before I came home with the baking soda I needed and not the baking powder I bought the first time.

If you plan on buying baking soda in Vienna, Austria, whether for baking or cleaning, but have no idea what you should be looking for, head to the baking section of most supermarkets (Penny Markt does not seem to sell it, but Spar, Billa and Billa Plus definitely do) and look for small packets or containers with the word Natron on the label.

Backpulver, on the other hand, is the German word for baking powder — and it is an entirely different thing.

As for the price, five of the small packets shown in the photo above (70 grams in total) cost me 35 cents at Spar last week. You can also pick up a 200 gram container for 99 cents.

So, now you know.