Having recently arrived back in Austria after several months spent in the United States, one of the things that has gone through my mind again and again since getting back is the cost of groceries in Vienna compared to the United States.

Groceries that are cheaper in Vienna than in the United States.

At least compared to Wilmington, North Carolina, where my parents live, and likely compared to most other places in the U.S. as well. Other than extremely large American cities that is, where prices will of course be higher.

So, what is the cost of groceries in Vienna compared to the United States? Is everything cheaper? Are some things more expensive? And where should  you shop to get the best deals?

The cost of groceries in Vienna compared to supermarkets in the U.S.

One thing you will notice when you shop at a supermarket in Austria is most supermarkets have a wide range of items — both fresh and processed, packaged and non-packaged, organic and non-organic.

That means, if you are used to a large choice of food products at supermarkets in the U.S., while the labels may look different, you will find the same or similar food here in Vienna.

Price-wise, however, that is where things differ.

According to Numbeo, which tends to be accurate with its price information (although they seem to be inaccurate on a couple of items), the cost of groceries in Austria is 4.25% lower than in the United States.

When it comes to the cost of groceries in Vienna compared to American large cities like New York, Los Angeles and Chicago, I guarantee you will find the Austrian capital to be much cheaper.

I will go one step further and specifically reference Vienna compared to Wilmington, North Carolina, where I spent several months shopping for every kind of grocery product you can think of.

It is there where I also found prices in the U.S. for most of the same food I buy in Vienna to be anything from 10-70% higher. Depending on the product.

I shopped at so-called ‘affordable supermarkets’ like Walmart and Aldi (Hofer here in Vienna) and, even there, I discovered prices were higher than I was used to paying in Vienna. 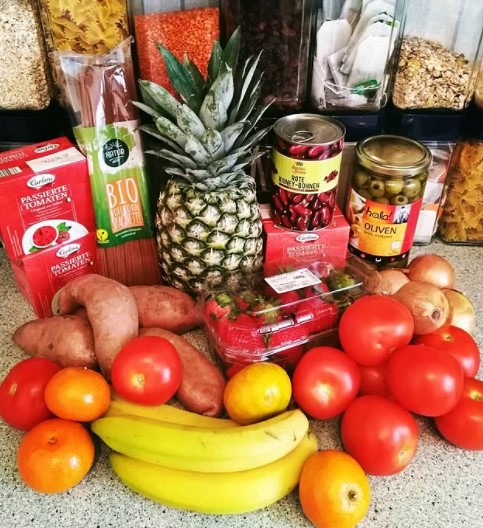 Bread was 40% more expensive in the U.S. for both sliced white bread and uncut whole wheat or rye loaves of bread, and I couldn’t even find uncut loaves fresh out of the oven and still warm like I can here at any supermarket in Vienna.

Cheese was 20-50% higher and, honestly, if you buy American cheese there is no comparison compared to European cheese (plastic tasting for most typical American cheese, sharp, flavorful and tasty for the Dutch, French and Austrian cheese I usually buy).

Eggs were around 10-15% more expensive in the U.S., plus finding eggs from free range chickens is easier in Vienna.

Rice is also cheaper in Vienna (around 70% cheaper), as are fruit and vegetables, which I found exorbitantly expensive in America — between 40-60% more expensive for just about everything I would normally buy in Vienna.

Beer and wine are also much cheaper in Vienna. Unless you shop at Aldi and pick up a bottle of Winking Owl wine at $2.95 a bottle (which is excellent for a cheap wine). In that case, cheap Austrian wine versus cheap American wine, and you will pay about the same.

Milk, however, is slightly cheaper in the United States, and chicken and beef about 15% cheaper.

In fact, the only food I bought in the U.S. that I found much cheaper than in Austria was fish — salmon, cod, sole etc.

Fish is affordable in the U.S. and quite expensive in Austria. To the extent that, for the same size pieces of fish I would regularly buy in the U.S., I would pay at least double in Vienna.

Then again, Austria is a landlocked country, so much of the fish sold here comes from further distances than in America. 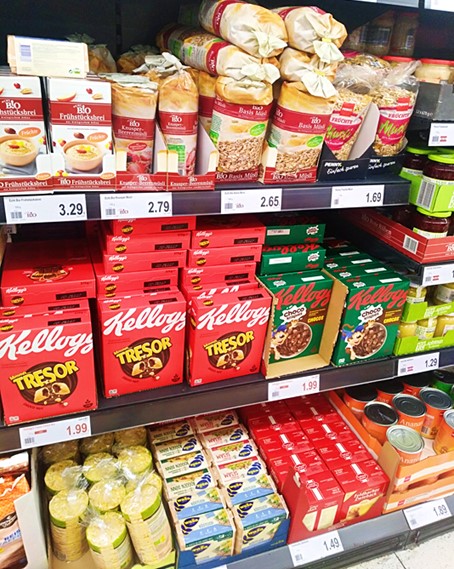 Where to find the cheapest groceries in Austria

As I have mentioned before, I tend to buy my groceries in Vienna at discount supermarkets like Hofer (Aldi) and Penny Markt. After all, why pay more for the same fruit, veg, milk, cheese, bread, eggs, pasta etc when I can buy them cheaper there?

That means, if you are in Vienna and shop at supermarkets like Billa and Spar, while I do like both stores and shop there for a few items, most of their products are higher priced than Hofer and Penny Markt. In that case, you may only find groceries in Vienna to be 5-10% cheaper than in the United States. 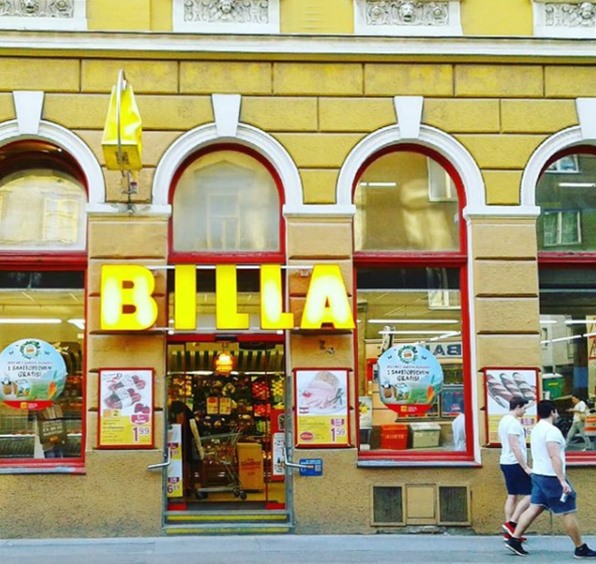 Overall then, from my own recent experience in the U.S. and from shopping at supermarkets in Vienna for over five years, I would estimate shopping at a discount supermarket in Vienna could save you anything from 10-50% on your weekly grocery bill.

In fact, I only spend €80 a month for groceries in Austria (I’m a vegetarian who very occasionally eats fish), and I eat extremely well for that.

When I considered spending the equivalent $93 in the U.S., I could probably scrape by if I cut out some of the things I buy in Vienna every month, but I definitely would not eat as well or as healthily.