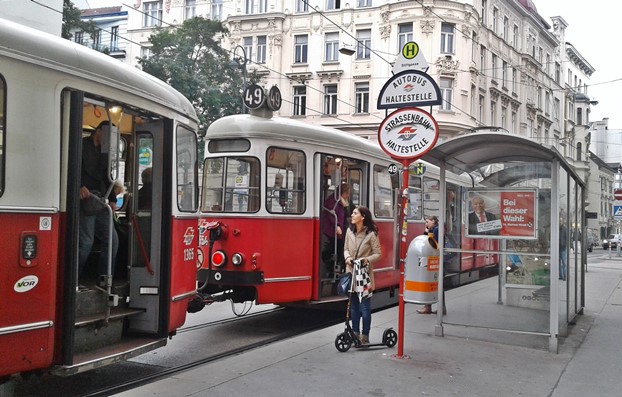 If you visit Vienna, you will see quickly how popular Vienna’s trams are for both the Viennese and for people visiting the city, as many trams that move around the city are standing room only.

In the last two years, of course, the number of passengers on Vienna’s trams has dropped markedly, due to either government Covid lockdowns that banned international tourists from arriving in Austria, or because people like me prefer to walk than to be smothered under a mandatory FFP2 mask.

That being said, the number of passengers on Vienna’s trams every year is quite astounding.

Especially when you look at the Wiener Linien statistics (Wiener Linien being the company that runs the city’s tram, bus and train systems).

According to them, during 2019, the last year official passenger numbers for Vienna’s trams were released, there were 304.8 million trips taken on Vienna’s trams.

In a city of 1.9 million people, that likely means most people take several hundred trips on Vienna’s trams every year.

The number of passengers on Vienna’s trams every year, however, is not that surprising when you consider the following:

Vienna’s trams are convenient, with more than 1,075 stops around the city, it is easy to get anywhere you need to go on a Viennese tram.

The cost of an annual public transportation ticket, which covers Vienna’s trams, buses and underground trains, is just €365 — ie: €1 a day (buy annual pass at Wiener Linien) — and, if you are a senior citizen, it is only €235 a year.

That pass allows you to take all Wiener Linien transportation (trams, buses and underground trains) as many times as you like, every day, for a year.

Vienna’s trams also arrive every couple of minutes, are clean and safe, and generally stop close to bus and underground train lines, making it easy to hop from one mode of public transportation to another.

In other words, it isn’t surprising the number of passengers on Vienna’s trams every year is over 300 million. To me, it’s just surprising more people don’t ditch their cars and use the trams instead.

Check out my mini video below of one of Vienna’s old trams. Yep, they’re my favorites.