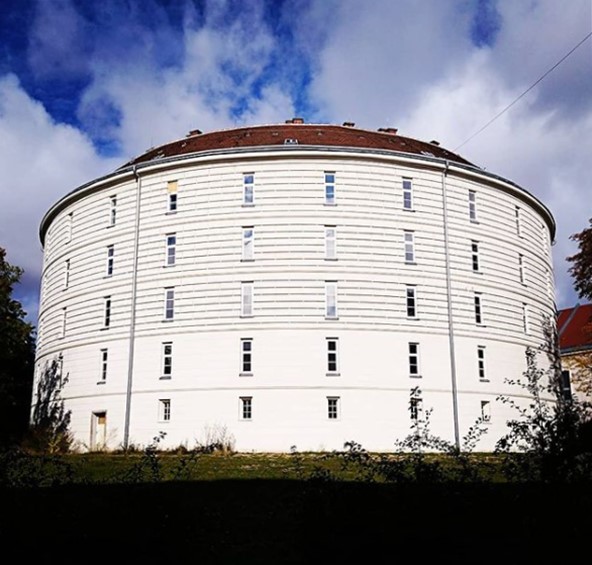 Vienna’s Narrenturm — Photo of the Day

I take walks around Vienna, Austria almost every day.

They are a wonderful way to keep in shape and stay healthy, while wandering around admiring what this gorgeous city has to offer.

Most days I take a different route, and sometimes even head off down alleyways to find out where they go.

Such was one of those days when I stumbled across Vienna’s Narrenturm last year — a circular building in a deserted section of the grounds of the University of Vienna that stood out against the blue, whispy-clouded sky as it had obviously been given a recent paint job.

Of course, at the time, I had no idea what Vienna’s Narrenturm was, how old it was, or what it signified in the city’s often strange history.

What is Vienna’s Narrenturm, and why is it called ‘The Fool’s Tower’?

Apparently, the German word ‘Narrenturm’ translates to ‘The Fool’s Tower’ in English.

Now, if I had known that was what it was called at the time I took the photo, I would have taken a closer look.

But why is it called The Fool’s Tower?

Now that’s where it becomes interesting.

The Narrenturm is a building located on the grounds of the old General Hospital of the City of Vienna — aka Altes Allgemeines Krankenhaus Wien. (And no, I had no idea the University of Vienna campus used to be a hospital either. Or that, before the hospital was established by Emperor Josef II, it had been a poorhouse).

The building itself was built way back in 1784 as Europe’s first psychiatric clinic (now does The Fool’s Tower make sense?), and featured 139 rooms for the patients spread out over five floors.

The building’s doctors and guards were officed/housed in the center.

If a visitor to the Narrenturm in the late 1700s is to be believed, while the institution was said to be focused on a new way of dealing with the mentally ill, some patients were still made to wear chains or straitjackets while in their cells, while others were allowed to roam free.

It also had, and still has portions of, a lightning rod on its roof. There are rumors the ‘caught lightning’ may have been used to treat the mentally ill, although that has never been proven.

Whatever the rumors, most seem to believe the clinic offered more humane treatments for the mentally ill than did other doctors in the general population at the time, as well as protected them from possibly being abused by relatives.

The psychiatric clinic remained in use, no matter what the treatments administered in it turned out to be, until 1869 when it was closed down.

Since 1951, the Narrenturm has been the home of the Vienna Pathological-Anatomical Museum, aka the Pathologisches-Anatomisches Bundesmuseum.

It is also one of the city’s listed buildings.

The Vienna-Pathological Anatomical Museum houses a collection of more than 50,000 types of physical abnormalities and anatomical pathology exhibits, some from several hundred years ago. All displayed in the corridors and rooms of the circular building.

A building where the mentally ill lived for close to a hundred years. One can only imagine then the atmosphere when you step into that building (which I soon intend to do), or the story’s the Narrenturm could tell.

The building itself was renovated in 2020 and reopened soon after. Hence why it looks so clean on my original photo. The museum can be visited by anyone with an interest in medical history as it is part of Vienna’s Natural History museum complex.

The Vienna Pathological-Anatomical Museum is open from Wednesday to Saturday, except holidays, with a ticket price of just 8,00 €.

Learn more about it, along with info about guided tours and reduced ticket prices, on the Natural History Museum’s website.

And, of course, check out the Google map below to figure out how to get there.

While you’re there, also be sure to wander around the University of Vienna’s pretty campus. It features an excellent book shop, a couple of lovely cafes/restaurants, a pizzeria, a beer garden and even a Billa supermarket, as well as some nice places to sit and watch folks walk by