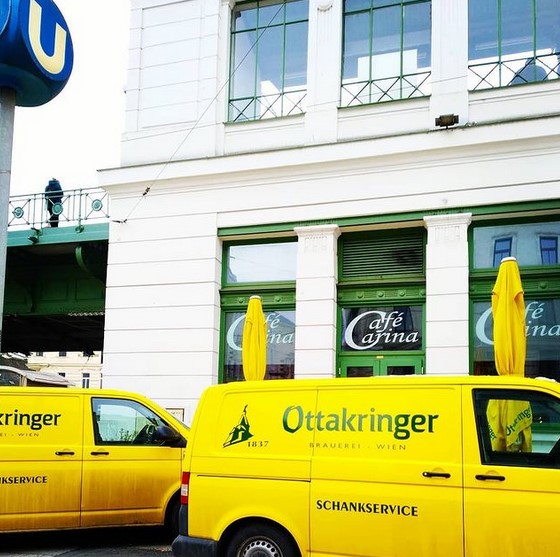 Special Note: I am in the process of moving all my Vienna photos from Instagram to Oh My Vienna, as I detest that social media platform with every fiber of my being.

This is one of those photos. Namely, a shot of Ottakringer beer vans outside Cafe Carina, which was originally uploaded to Instagram on January 8th, 2019 with the following comment:

MUSIC, BEER & TRAINS — In that order. 😜 3 of my favorite things about Vienna in one photograph. #CafeCarina (cool live music) #Ottakringer beer (so good) and the #UBahn (trains). And no, the Ottakringer delivery vans are not usually that dirty. 😜 The weather in Vienna has been brutal this week. 🚚❄️☔💨

And just in case you are new to Vienna, or haven’t even been here yet, so know little about Ottakringer, here is a quick history of the Austrian brewery.

Ottakringer Brauerei (aka Ottakringer Brewery), is the largest brewery in Vienna. Unfortunately, where once there were several large breweries, it is now the only national brand of Austrian beer that is still made in the country’s capital city.

The Ottakringer brewery site itself is in the 16th district of the city — the Ottakring district — which is where the beer gets its name. It is also the district of Vienna I currently live in. So, yes, I am rightfully proud of Ottakringer beer (it is incredibly tasty).

As for the brewery’s history, Ottakringer was founded way back in 1837, although it was originally named Planksche Brauerei.

In 1850, it was taken over by Jewish brothers Ignaz and Jakob Kuffner who massively increased the brewery’s beer production over the next few years. That large production continued under various members of the Kuffner family right through until a few years before the Second World War.

As anti-Semitism began to grow in Austria, however, the Kuffner family was forced to sell the brewery for a low price to a non-Jew named Gustav Harmer.

But Harmer himself lost the brewery after also being forced out of business right before the start of the war. (Austria was not a nice place in the 30s and 40s for many people).

After the war ended, the Harmer family was able to get its legally-owned brewery back, when they were able to prove their original purchase.

As reparations to Austrian Jews who were financially harmed during Austria’s anti-Semitic past began to take place, heirs of the Kuffner family, who had escaped to Switzerland, were also compensated for being forced to sell Ottakringer Brauerei at a price far below its actual value.

Ottakringer Brauerei from the 1950s and beyond

Since the mid-1950s, as it moved on from its sad past, Ottakringer Brauerei has only grown in strength and revenue, and currently sells some of the most popular beer in Austria.

It has been my favorite Austrian beer since I moved to Vienna and, yes, I have tried (many times) every type of Ottakringer beer produced, and I like them all.

My current favorite, however, is the Ottakringer Helles, but the Goldfassl Pils is also nice if you are in the mood for a lighter beer.

You can try the full range of Ottakringer beers yourself at many bars and restaurants in Vienna and throughout Austria.

As for the company itself, in a normal year, the Ottakringer Brauerei not only offers brewery tours, it also organizes cool events like music festivals, Halloween parties and beer gardens.

It is even possible to rent various locations around the brewery to accommodate large parties and nightclubs for up to 2,500 people.

How cool is that?

You can learn more about that on the Ottakringer Brauerei website. And, of course, if you haven’t already, do try Ottakringer beer. It’s one of the many things I love about living in Vienna, as it is truly excellent.