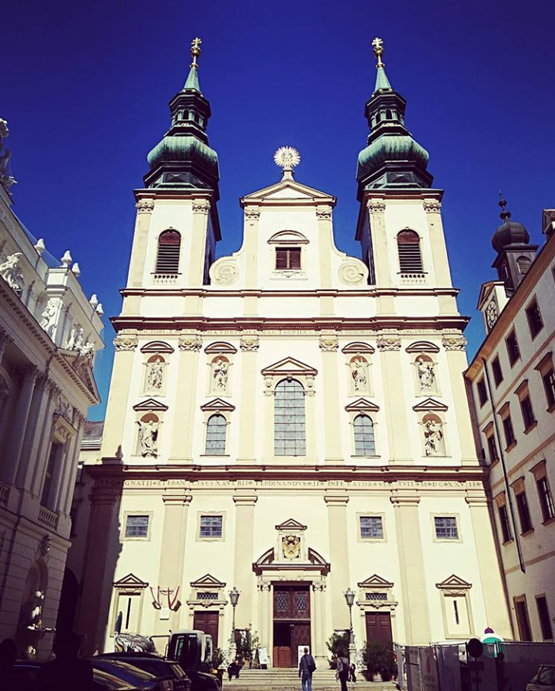 One of the things I enjoy about living in Vienna, Austria are the secret churches dotted all over the city.

Not secret, of course, to most Viennese but, to me a recent transplant to Vienna, absolutely secret as they suddenly come into view hidden in places I don’t always expect.

Take Vienna’s Jesuitenkirche, also known as the Jesuit Church or University Church, which was built between 1623 and 1627, and can be found just off one end of Bäckerstraße in the city’s 1st District, aka Vienna Inner City.

I stumbled across that church a couple of summers ago when a former student from Thailand was visiting me in Vienna after just completing her Masters degree in Poland. (Yes, I taught English in Thailand for 14 years)

After lunch in the Museum Quartier, we took a walk around the 1st District as it is one of the best areas of the city to see the most well-preserved and oldest buildings.

I am an architecture nut — I don’t know anything about architecture, I just appreciate beautiful buildings, and Vienna is chockful of them — and my student admires Europe’s old buildings too, so a walk through much of the 1st District was a must.

But imagine both of our surprise to suddenly stumble across Vienna’s Jesuitenkirche, down a side street and off to our left at the end of a plaza called Dr. Ignaz Seipel-Platz.

Framed against the deep blue sky that day, the two story church with its twin towers topped with those gorgeous green and quintessentially Vienna spires was really a majestic sight.

Vienna’s Jesuitenkirche was redecorated in 1703 by Andrea Pozzo, an Italian painter, architect, designer and Jesuit brother. He added the two towers, and recreated the facade of the church in a more Baroque style, a well as designed the stunning interior ceiling frescoes and trompe l’œil dome.

Sadly, Pozzo died just a few years later at the age of 66, and is now buried in the church.

Anyone visiting Vienna and who enjoys a beautiful church as much as I do should head to Vienna’s Jesuitenkirche as it is one of the city’s prettiest.

You will find the Jesuitenkirche at Doktor-Ignaz-Seipel-Platz 1, 1010 Vienne (Wien). Check its exact location on the Google Map below, and get more information about opening times on the church’s official website.

There are more of my Photos of the Day on Oh My Vienna here.