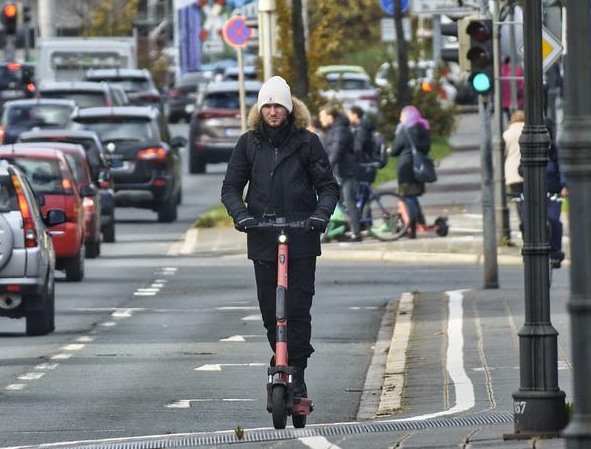 One of the very few things I dislike about living in Vienna, Austria are the rental e-scooters now left lying on sidewalks all over the city.

These e-scooters are hired out by several companies, with registered users able to pick one up from somewhere close to them and then ride off to wherever they want to go.

The problem with them, however, is not the e-scooters themselves but the people riding them.

Riders who often seem to have little sense of road safety or any grasp of the rules of the road, so put themselves and people around them in danger.

Riders who, quite often, just abandon the e-scooter in the middle of a sidewalk somewhere when they are done with it.

The rest of us are then left to have to walk around them or fall over them.

And yes, I almost fell over an e-scooter in Vienna when I walked around a corner recently only to find one laid flat in the middle of the sidewalk right in front of me.

If that had happened to an elderly person, they may have found themselves on the ground face first before they could shout “Oida!”

E-scooters in Vienna are used so regularly by thousands of people daily, we have now arrived at the point where they are becoming a public nuisance.

Something many Viennese are coming to realize, and an issue I am guessing (hoping) The City of Vienna (Stadt Wien) will soon be looking at legally.

Sure, that huge increase in e-scooter accidents could have something to do with Vienna spending more time in lockdown in 2021, due to the Austrian government’s crazy and ineffective Covid-19 restrictions, than any other city on the planet.

But, it is still alarming that, in just the first three months of this year, there were 50 accidents involving e-scooters in Vienna compared to the 51 in all of 2021.

Not surprising to me, or many people like me, however, as we see daily the stupid things e-scooter riders in Vienna do.

Things like riding two people to an e-scooter, (which I saw yesterday by two grown adult men) with the second person clinging to the driver and with his/her foot resting on the back wheel just to maintain their balance.

Things like e-scooter riders illegally wending their way between pedestrians crossing on a crosswalk or, of course, riding the e-scooter on the sidewalk.

All illegal, but a sizable number of e-scooter riders in Vienna do it anyway.

If you want to look at real danger in Vienna, the world’s most livable city and one of the safest, you only have to watch one of the many tourists renting e-scooters in Vienna, as some of them are a danger on the road.

Not only because it is often the first time they have ridden an e-scooter, so are unfamiliar with how one should ride it, but they are also unfamiliar with Vienna, its streets and its road rules.

In its extreme form, this could easily lead to an e-scooter-riding tourist mowing down a Viennese pedestrian, or ending up with themselves laid flat in the road, partway under a Vienna tram.

Regulating the use of e-scooters in Vienna

Now, I try not to be a party pooper. Especially as some of the things I like doing, others may not like.

After all, tens of thousands of people use them monthly, many of them safely, and they seem to be a decent moneymaker for the companies renting them out.

I am, however, saying the riders of e-scooters in Vienna should be regulated more as, if not, it will only be a matter of time before someone is killed.

And, as we all know happens in these situations, it is often the person not at fault (the pedestrian or the person standing at the Würstelständ eating their lunch) than it is the person causing the problem (the rider).

Meanwhile, stricter regulations are being placed on the riders of e-scooters in cities around the world as local governments tighten their use.

In Malta, for instance, e-scooter users must be at least 18-years-old, hold a valid driving license and be insured. These rules were enacted after a spate of accidents involving e-scooters.

In Sweden, riders under 15-years-old must wear a helmet when riding an e-scooter.

In Vienna, while The City of Vienna has regulated the use of e-scooters as strictly as they do bicycles, in my opinion, they now need to go after the riders who refuse to follow those rules more aggressively.

And, if nothing else, start handing out more/higher fines to those e-scooter riders in Vienna who seem to be unable to follow basic rules:

And please, please, please, if an e-scooter rider in Vienna is observed abandoning the scooter in the middle of the sidewalk (push the damn thing to one side, please!) or in a place that could be dangerous to pedestrians or other traffic, levy them a fine of a few hundred euros.

That way they may think twice before doing it again.

Finally, for those who do speak German (and this video really does need English subtitles at the very least), here is an excellent video from the Austrian police explaining the regulations for e-scooters in Vienna.