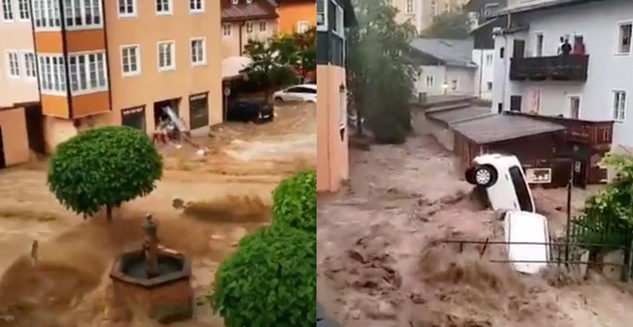 The flooding that has plagued parts of southern and eastern Germany this week has moved to some areas of Austria this weekend.

The town of Hallein, Austria is currently experiencing floods with videos on YouTube showing flood water cascading down Hallein streets, carrying cars and debris with it, after the Kothbach river burst its banks.

In one video (watch below), a torrent of water is seen rushing through a shopping district, causing shop doors to burst open and the store’s stock to burst out onto the street where it is then swept away by the flood.

Sirens can be heard screaming in the background in some footage.

Two men were also filmed struggling in flood waters in an attempt to save a third man. A feat they did finally achieve, although all three were swept down a flooded street before being able to make it to slightly higher ground.

Some residents of Hallein were rescued from their homes by trucks and boats.

The flood water has since receded, but authorities are still worried new rain could cause renewed flooding.

Hallein is a small town of around 22,000 people in the Salzburg region of the country.

It is the second-largest town in the state of Salzburg, and the birthplace of Silent Night, Holy Night composer Franz Xaver Gruber and alpine ski racer Marcel Hirscher.

Meanwhile, authorities in Kitzbühel, a medieval town around 100 kilometers from Innsbruck, have also reported having to pump out some of the town’s cellars, while in Kufstein, approximately 33 kilometers from Kitzbühel, residents were told to relocate to higher floors.

Some flooding has also occurred in Salzburg and Vienna.

Flooding began in Germany earlier on Wednesday, with torrential rain deluging the areas of Rhineland Palatinate, North Rhine-Westphalia and even parts of Belgium.

At least 184 people have lost their lives in Germany and Belgium, with others still reported missing.

No injuries or deaths have been reported in Hallein so far.