Back in October, I wrote an article asking the question “Do Austrians in Vienna speak English?” and ended it with my opinion, which is “Yes, most of them do”.

After all, I’ve lived, worked and traveled all over the world, and can say without a doubt Austrians speak English better than any other country I have visited.

A couple of days ago, though, I stumbled across an article about the latest English Proficiency Index — an annual report put out by the Swedish company EF English First — and a company I am familiar with as I had friends working through them when I taught English for nine years in Thailand.

The article, from a writer at the Bangkok Post, was about how utterly terrible the Thais’ English language skills are compared to most of the rest of the world, appearing as they did at 100 out of 112 countries on the list.

No surprise to me as, while Thais are absolutely my favorite people on the planet, due to the country’s terrible education system, most of them have extremely poor or non-existent English skills. (Why do you think my Thai skills are markedly better than my German?)

That, however, is not the case for Austria as, according to the 2021 English Proficiency Index, Austria came in at #2 out of 112 countries in the country’s English language proficiency. Second only to the Netherlands.

While I talk about Austrians speaking better English than those in almost any other European country, do note the EF English First report actually references people in Austria that are studying English.

That means it likely includes some non-Austrians learning English in Austria as well.

But, for the purposes of this article, we’ll go with “Austrians speak better English” because I don’t want to write a book on the subject — so, live with it :).

Now, onto the reason why it seems Austrians speak better English than those in every other European country except one (including its fellow-German speaking country Germany, which came in at #11), and better than most of the rest of the world as well.

And why I am not remotely surprised. 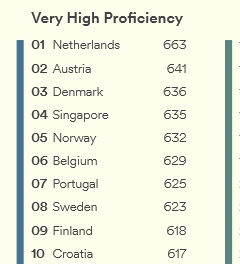 Austria placed #2 out of 112 countries in its English proficiency

The EF English First study was based on the test results of approximately two million adults in 112 countries.

The results of the tests showed people studying English in Austria had a very high level of proficiency in English, placing them at #2 out of 35 European countries (interestingly France, Spain and Italy have Europe’s worst English skills), and #2 out of 112 total countries.

(The list of countries can be found here, along with a full downloadable report).

The median age of those tested worldwide was 26 years old, with 53% female and 47% male. Ninety-six percent were under 60 years old.

What is interesting too is, when you look at the results for Austria and the country’s English proficiency over the last 10 years, it has always placed between #6 and #10.

This year, however, is the first for it to hit #2. Looks like people living in Austria put the country’s never-ending Covid-19 lockdowns to good use, eh?

Why is the level of English so high in Austria?

Obviously, I am not a scientist, but these are my observations from my almost six years living in Austria. Observations other non-Austrians have also mentioned to me when we talked about the high-level of English proficiency of the majority of Austrians we meet.

Why is it important that Austrian’s English proficiency is so high?

These are just a couple of points taken directly from the EF English First report that I thought were interesting, with my added comments, and definitely applicable to Austria and its high English language proficiency.

All in all then, not only are Austrians better at English than most other non-native speaking countries on the planet, the country is also reaping the economic and social rewards of its heavy investment in English language learning.