If you are American, British or from one of many other countries in the world, you will be used to buying cheap ibuprofen and other pain killers like aspirin from your local drug store.

Unfortunately, that is not possible here in Austria as, under Austrian law, ibuprofen and other NSAIDs like aspirin are not allowed to be sold over the counter at a drug store like DM, Müller or Bipa.

Instead, they can only be sold at a pharmacy — called an ‘Apotheke’ in Austria. (see photo above)

That legal restriction makes buying ibuprofen in Austria much more expensive than you will be used to spending for ibuprofen in your own country.

You can, however, buy it without a prescription. 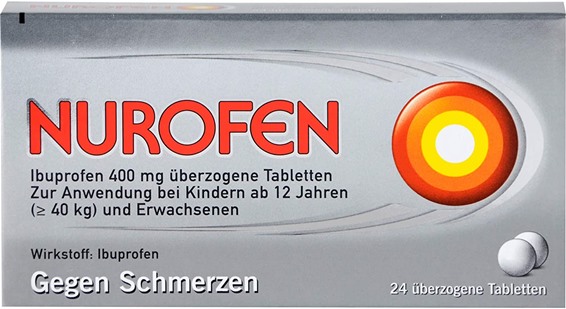 How much is ibuprofen in Austria versus the cost in many other countries?

In fact, buying a pack of 40 ibuprofen tablets in Austria at an Apotheke will cost anything from €13-15, sometimes even higher.

Compare that to buying a bottle of 250 generic brand tablets in the United States at just about any drug store for less than $4 (currently the equivalent of €3.85), and you can quickly expect to pay five or six times more for ibuprofen in Austria than you will pay in the U.S. or elsewhere.

That large increase in price is due to the monopoly Apotheken (plural of Apotheke) have in Austria, allowing them to charge a huge mark up on a drug like ibuprofen.

If supermarkets or drug stores were allowed to sell the drug, competition would quickly make it much more affordable.

The Austrian government rationalizes this by saying it is in the ‘best interests of the public’.

The drug store DM has even tried to get this law overturned in court by saying it is an unconstitutional barrier on freedom of trade, let alone a unnecessary expense for the consumer, but, so far, has failed.

That is why someone in Austria will pay far more for a pack of ibuprofen than a Brit, a Spaniard, an Italian, an American, a Thai, a Mexican or one of many other nationalities.

Unfortunately, that’s just the way it is. An expensive pain in the ass, when all you want to do is quickly cure a minor headache.